I had a leisurely morning as needed all the rest I could for the day ahead and couldn’t set off until after 9 as I needed to buy nutrition for the day. I went for 5 Cliff Bars and 2 granola bars. I thought this would excessive but as it turned out I got through it all.

I set off for Seymour first as its considered the hardest of the three mountains, meaning Grouse would be second and then Cypress to finish off. I took the same route there as last weekend and took it very easy as I wanted to save my energy and this was going to be a long ride (the most hours in the saddle and climbing I’ve ever done). It was an absolutely stunning morning and as I crossed the bridge I could see all three mountains waiting for me and realised the task ahead. There was also the most amazing view to the East up the Indian Arm, where there was cloud under the bridge and down the valley but clear blue sky. 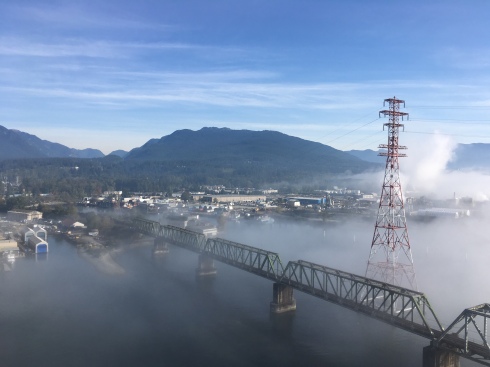 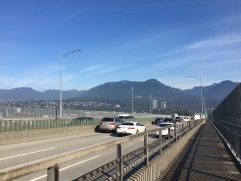 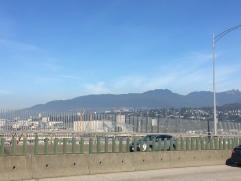 I took the climb at a steady but decent pace as the day was still young. The first 4k is where the gradient really hurts and then there is another kick between 7-8k. Pacing myself made the climb a lot more enjoyable and the conditions could have been better. It was very sunny but I was able to cycle in the shade of the trees so I didn’t overheat. It was beautiful and couldn’t have been more different than Sunday, see the photos below: 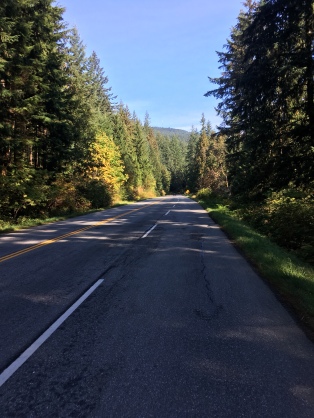 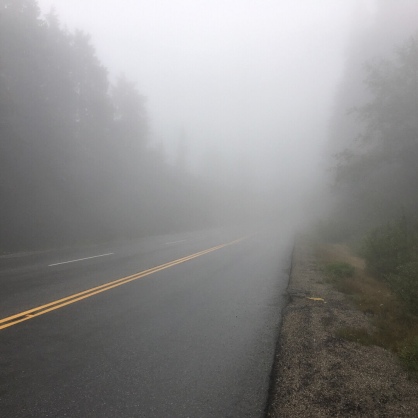 At the top it became clear that this was probably be clearest day since I’ve been in Vancouver. The view is amazing from the top of Seymour and for the first time I could see Mt Baker in Washington (US). I had a quick photo before heading down pretty quickly as had a long way to go. Despite the beautiful day the descent was quite cool again, the air at altitude is quickly cooling down but nothing like Sunday and with the conditions I could go flat out on the way down so was back in the warm air in no time. 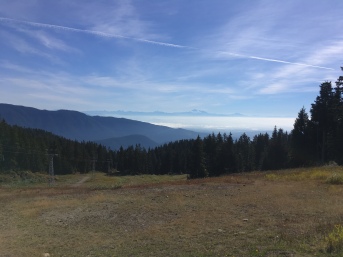 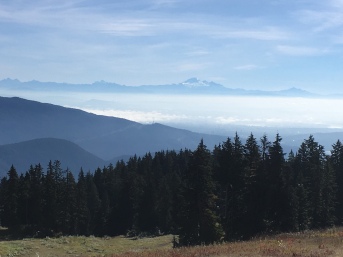 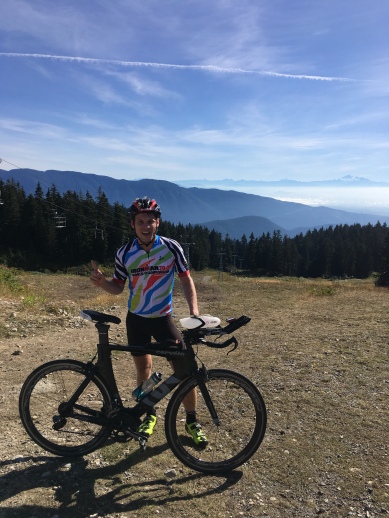 From the bottom of Seymour to the bottom of Grouse is fairly straight forward and takes you straight through North Vancouver. The problem with the route I took was that there were traffic lights every couple of blocks which made it very stop start, which is very tiring so there are probably better routes to cycle. I was also beginning to feel my legs a bit and was staying on top of my nutrition after what happened in the Gran Fondo. At this point I treated myself to a whole cliff bar as I was hungry and quite quickly the energy levels returned.

For Grouse Mountain you can only climb to the bottom of the gondola rather than the peak. I hadn’t done the whole climb up to the gondola so I didn’t really know what to expect. I have cycled to the hatchery for my fishing and knew to this point would be easy on a nice bike but had been warned that the last 1.5k was one of the toughest sections of the day. This turned out to be pretty much spot on. For the most part its a fairly simple climb and was comfortable till the last 1.5k and then it really kicked up. I had to dig in but its quite easy to get in to a nice rhythm in a low gear and slowly make your way to the top. I stopped for a quick photo, did a loop around the car park and then straight off towards Cypress mountain. Given what I had done so far I was feeling about as good as I could have hoped but there was definitely some fatigue creeping in to the legs. 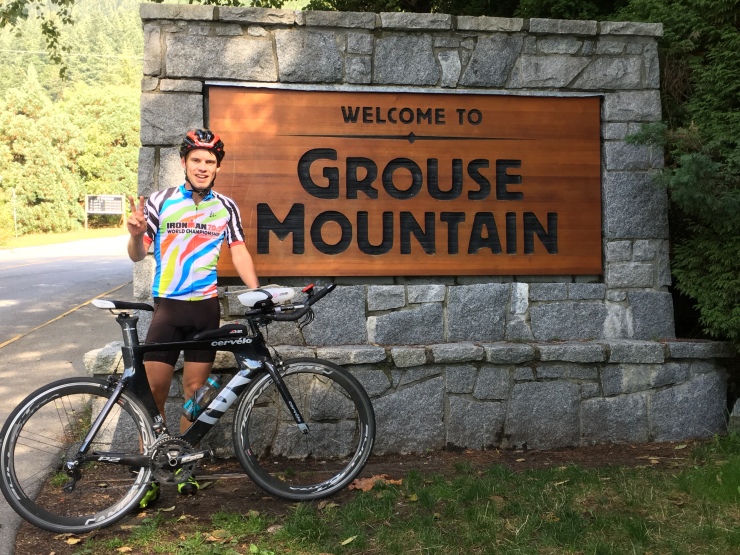 I know the route up to Cypress the best and while the climb itself isn’t that bad the roads to get there are. There are 3 short very sharp climbs as you work your way up towards Cypress road. These really took their toll on some already tired legs and I was moving pretty slowly. I still had plenty of food but was beginning to run out of water as by this point it was very warm.

Once you get to the bottom of Cypress the climb isn’t that bad. While it is longer than Seymour the gradient is more manageable and there aren’t any steep sections. I quickly set in to a very comfortable rhythm going at a reasonable pace and just watched as the km’s went by. The downside of doing Cypress last was it was at the hottest point of the day and unlike Seymour there is no shelter from trees. This meant I was really overheating as I worked my way up, and running out of water quickly, but as it was the last climb I put this out of my mind. I also had a close encounter with a  squirrel carrying a fur cone that was probably 75% the size of the squirrel. I was amazed it could carry it let alone run around with it.

As I approached the last couple of km’s I was really tired but comfortable enough and had eaten pretty much all my food. It was a case of just keeping the legs spinning as the gradient wasn’t too tough. Then 1k from the top I encountered some road works and had to stop for about 5 minutes. This was great as it allowed me to have a rest but I was concerned I wouldn’t get going again. Eventually the nice traffic lady let me go and I made my way to the summit. Going past the roadworks wasn’t great for the bike as the new asphalt sticks to the front wheel. My Cervolo doesn’t have much clearance so I could hear it rubbing but there wasn’t anything I could do and I wasn’t heading back 1k short of completing the challenge.

But I made it and completed the Triple Crown. 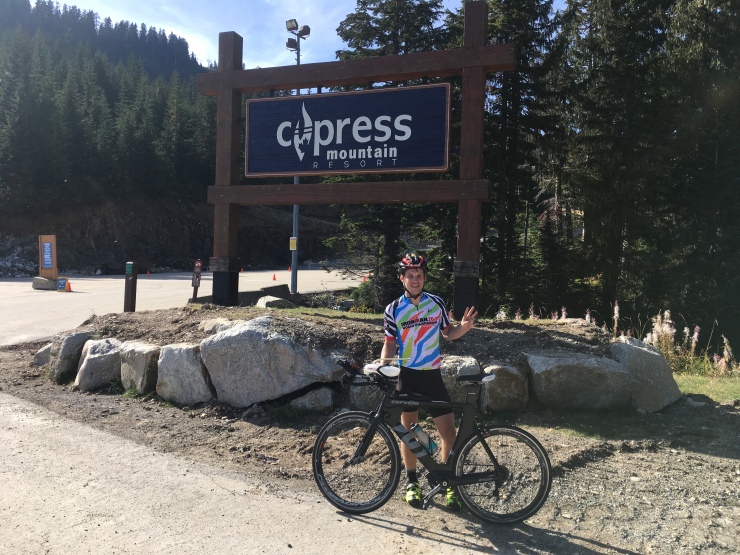 Having got my third and final photo I headed straight back down as I just wanted to get home. I had to stop for some photos on the way as the views were gorgeous in every direction. Unfortunately there aren’t any great vantage spots on the road and my camera struggles with distant scenic photos. The views of Vancouver Island and Mt Baker in the distance were particularly astonishing as it was just so clear which makes a nice change after the smoke of August. I cant wait to eventually make it over to Vancouver Island for some cycling and Mt Baker for some hiking/camping. 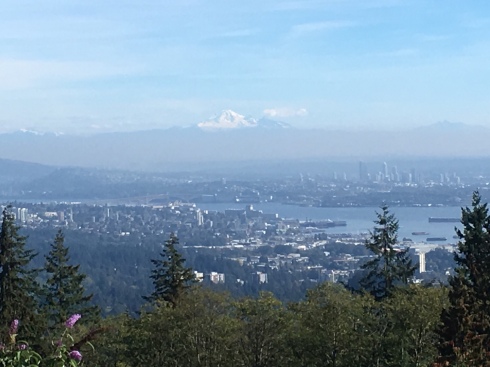 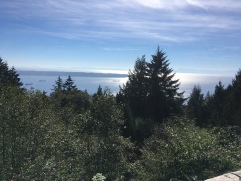 You cant see it very well but Vancouver Island is out there somewhere! 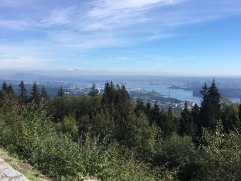 Vancouver with Mt Baker in the distance

I had an uneventful ride home and arrived back in just over 6 hours having done 121k and 2572m of elevation. I feel ok and am very happy to have completed another challenge but my legs are absolutely shattered. It did however make me realise the training for an ironman is going to be brutal on the bike, but that is for another year. 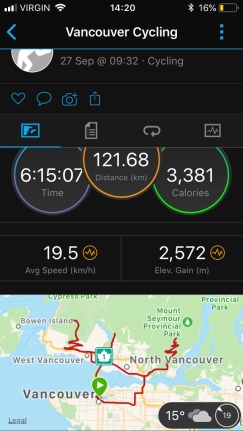 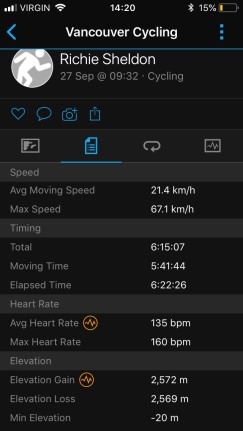 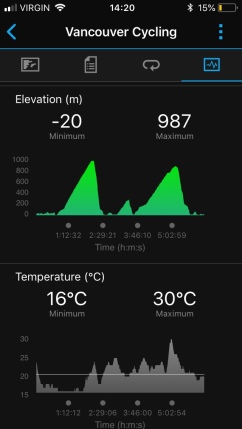 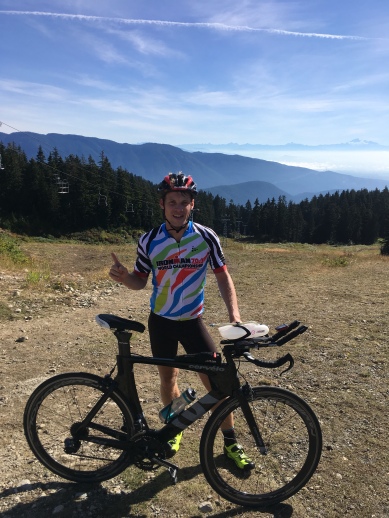 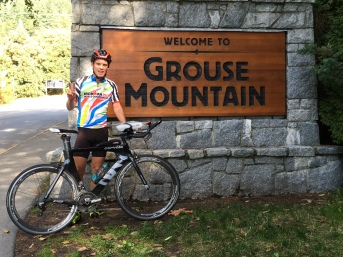 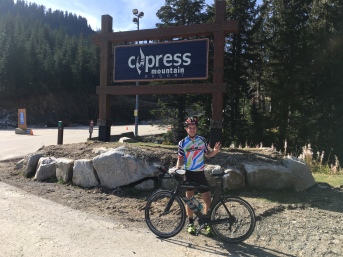