I began my season with the North Shore Triathlon, a sprint, to get back in to the swing of things. 444m pool swim, 17.9km bike, 5k run.

As with all triathlons it involved with an early start and lots of prep the night before. I had no idea how the event worked so got there super early despite being one of the last starters. 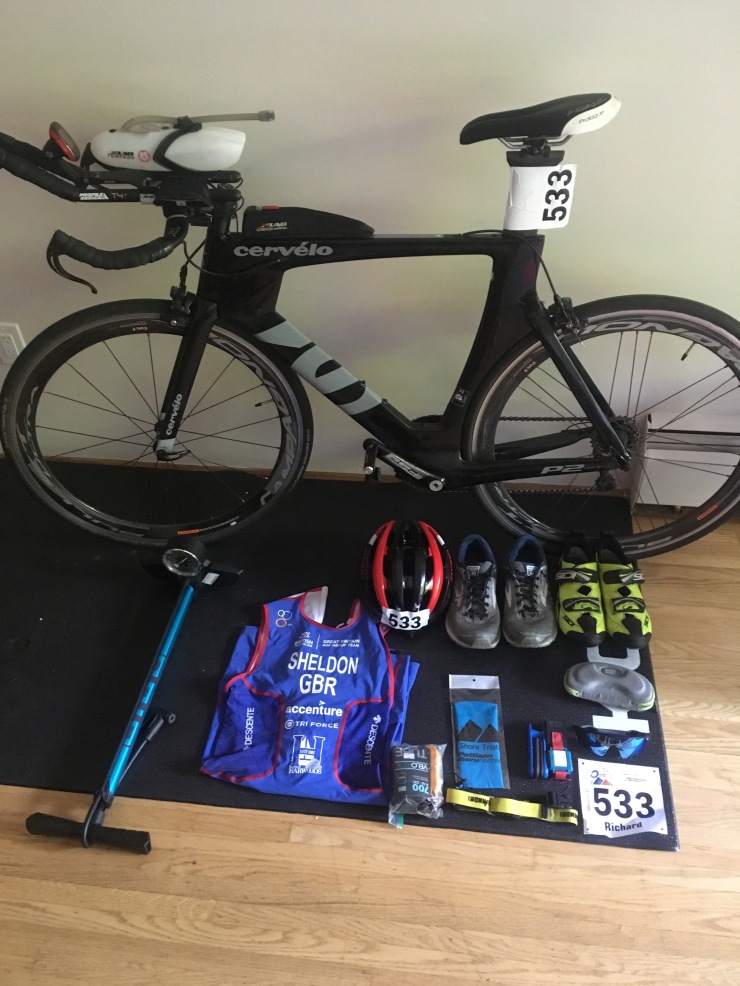 Racking my bike I immediately felt at home as the vibe was very similar to my home triathlon on the Isle of Wight. A very friendly event that welcomes all abilities and doesn’t take itself too seriously. The perfect place to start :).

This event had a number of firsts for me: 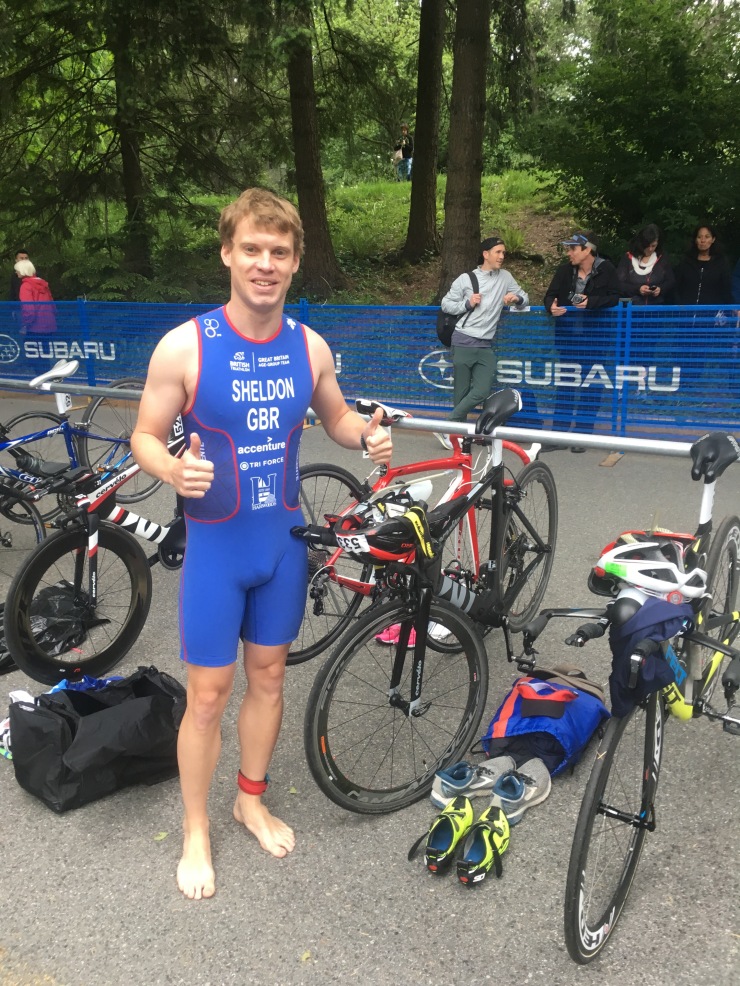 This was also my first sprint in a couple of years and didn’t really know what to expect. My preparation had been far from ideal resting the entire week with a back injury. I felt ok but would just have to see how it went. If I was in pain post bike I was going to pull out as there are bigger goals this season.

The forecast was no good but it held off for the kids race which was lucky. 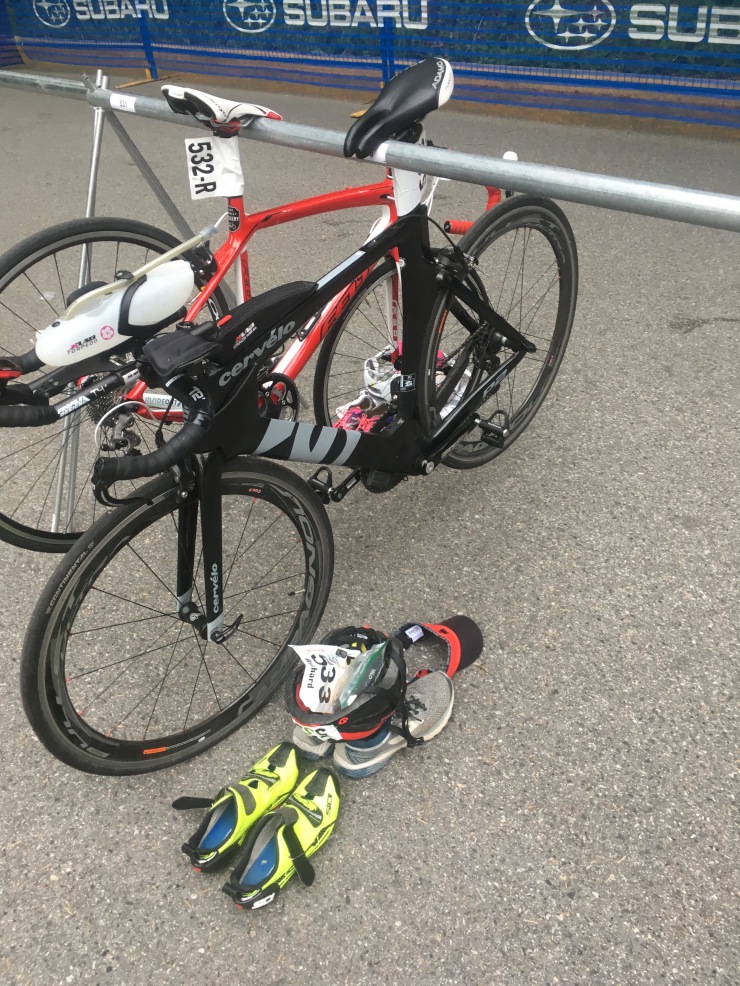 I had a lot of time to kill before my start and I spent most of it sheltering inside watching the swimming. The swim here differed to the IOW triathlon in that you swim up and down lanes moving across the pool, rather than being in a small group in one lane.

It’s also a larger event and this swim method did cause carnage for the kids and the slower adults. People were using every stroke you could imagine and even a lot of walking as the pool was very shallow. Behind a slower swimmer a queue of people who couldn’t overtake would form and people wouldn’t stop to let others past. However the atmosphere and comradery was excellent and like members of my family plenty of people were stopping at each end to have a rest and a chat. Emphasising the corinthian spirit of the event.

When my turn came I got very lucky. I was in the second quickest wave and people were more accurate with their swim times and have a better understanding in the pool. I quickly caught one person who let me overtake and then swam past another. For the rest of my swim I had a clear run which was awesome. I didn’t do very much breathing in the first few lengths which meant I had to switch to a lot of breathing in the latter stages. All in all I couldn’t complain. I had estimated 7 mins and was 7:01 so bang on to start.

Next the bike. A quick run in to transition where it had started to rain pretty hard. Glasses on, number on, hemlmet on, shoes on, collect bike and off we go. The start to the bike was brutal. Mounting and instantly straight up a steep hill out of the car park. In the junior race the marshals had practically been doing shuttle runs pushing all the little kids up the hill. I received no such help but was up and away.

I settled on the the tri bars feeling strong but my heart rate was so high. The bike was going to be under 30mins so there wasn’t time to worry about getting it down. I had some power targets (something I need to practice) but my garmin was at 3s average power and over the place so I basically rode flat out on feel.

The course was 4 4k (ish) loops. 2k out and back basically. This meant that just as I was settled it was time to slow, sharp u bend and then accelerate again. Given how wet it was the turns had to be taken slowly and carefully. It was also raining hard enough that the drops hurt at top speed and a number of other people later complained that they had felt really cold. I was really pushing so was stressed by other things.

4 laps done and I had only had one person overtake me (on my weakest leg) so was very happy. I later found out that I had set personal bests in pretty much every section of my data possible which was awesome. But at the time I knew a lot of people had started after me (in theory on quicker swims) so had to keep pushing on. Very gently down the hill in to transiton. Rack bike, helmet off, shoes off, shoes on, go! I love running!

My heart rate still so high but I was feeling super strong, my back was ok, and I knew there was nothing to do but push it. I again had targets but with a hilly course it was hard to get average pace. So again it was racing on feel (aka flat out). It is really helpful starting at the back as you have a constant line of people to chase down which is a great motivator.

After about 2k I began to feel the effort of going hard for the best part of an hour. At this point I always break the race down in to small chunks and tick them off or think back to hard training sets and how I dig deep and 10 minutes really isn’t that long.

As the course flattened for the last couple of km’s my legs came back to me and I just gave it everything and was getting a lot of support from other competitors (another aspect I love about triathlon). The frustrating thing was I knew I could run faster, my muscles were hurting but no where near max effort or tired. However my heart and lungs were screaming. This is very different to my usual, much longer, races where you heart and lungs only really scream towards the end and by that point your body is already knackered.

Eventually it was down the finishing shoot, across the line for my medal and try to recover without being sick. I didn’t know anyone so after a brief chat with a few people I had seen on the course, I collected my bike and returned it to the car before coming back to prize giving. I had no idea of how I had done but felt I must have been top 3 in my age group at least so should hang around for prize giving. 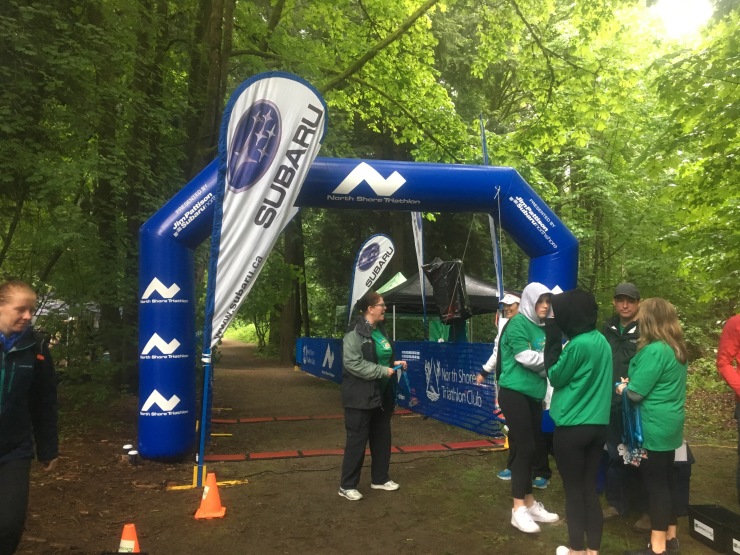 The triathlon community is so friendly and open, people are always willing to chat or help so it is never hard to meet people. I spent the next hour chatting to the various people I had met in transition or seen on the course or was just sat near. It really made me feel so welcome rather than being all on my little lonesome.

Just before prize giving started one of the guys I was talking to pointed out everyone here must know they had come top 3. I laughed and said I didn’t and he showed me the results. 1st in age group and 6th overall. Very happy with that. Despite being very happy with my place I didn’t finish above 7th in any of the individual disciplines. Slightly a jack of all trades master of none but its nice to not have a weakness. 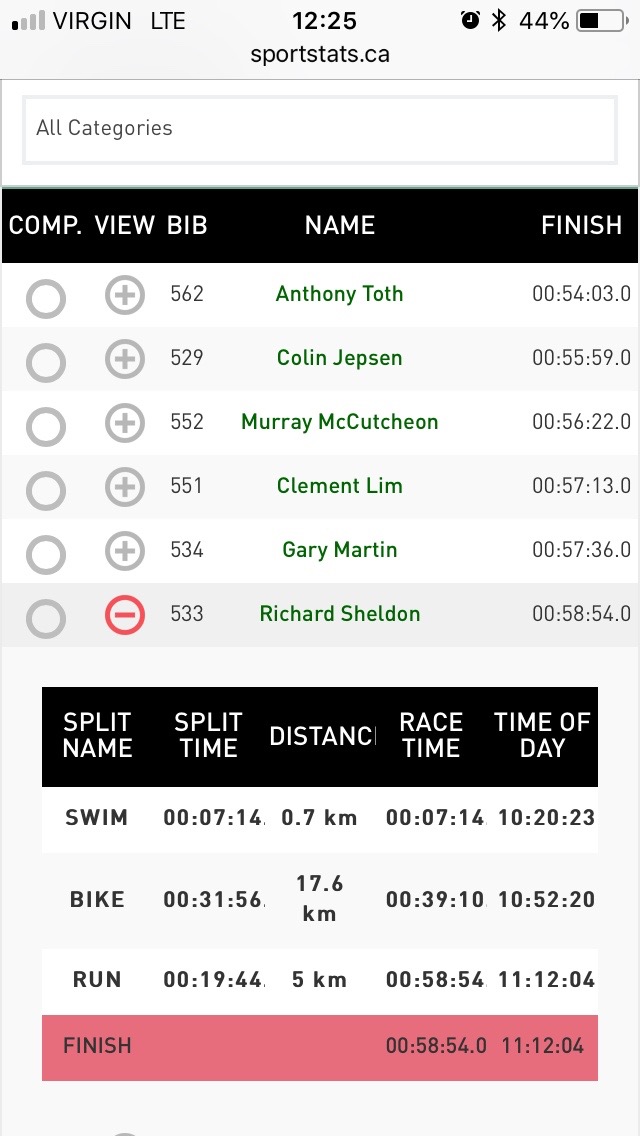 I want up and collected my medal, unfortunately no trophy but not complaining as all in all an excellent event and very happy with how I raced. 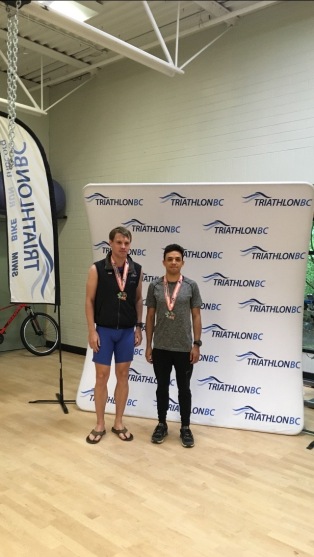 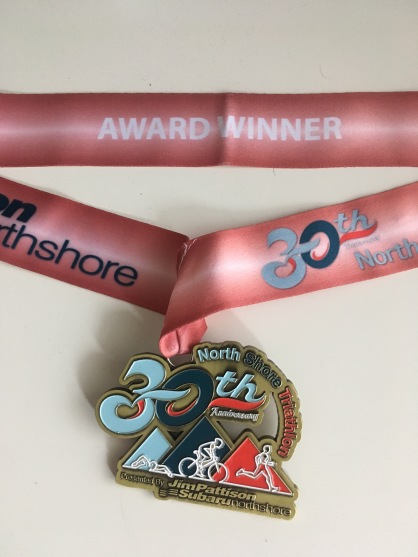 Having had some fun in Vancouver at 5k races and this sprint it is now time to up the training and move on to the more serious races, where unfortunately I wont be at the pointy end. Next up is the European Championships in Romania where I will be racing for GB. The aim is to not come last and enjoy the experience, anything else is a bonus.

In the meantime though I really need to get my head down to training and physio to get ready and back to full fitness!!