Skip to content
Another 5 30 start but I haven’t got over the jet lag from South Africa yet so this was conveniently when I woke up anyway.
Today was meant to be an end of season ride to enjoy the special views and try something new, the aim was not to bury myself! However I knew it was going to be a challenge as its the longest ride I’ve done (122k) and a lot of climbing over a sustained period. I had also never been to Whistler so I had no idea what I was actually letting myself in for and on top of this I had no idea how my legs would hold up a week on from my last race.
The forecast had been bad but improved so I left the my jacket behind and set off for the start at Stanley Park and quickly found plenty of other riders heading the same way as there were 4500 people riding. The race started with groups being set off in estimated start times and I guessed I would be between 4 hours and 4 30 but in reality I had no idea and thought I should probably have been 4 30 to 5. 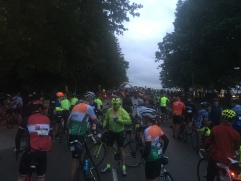 The start was very controlled through the park and across the Lions Gate bridge but then we hit a sharp climb up to the highway and the group splintered. I got very over excited and flew up the hill and on to the highway. Here the over excitement continued and I caught the group in front and joined the peloton. I had forgotten how effective riding in a group is and we quickly gobbled up lots of solo riders and smaller groups and I was doing large stints on the front as am used to riding “in the wind”  as you cant draft in triathlon. Plus as I didn’t have a plan I was just getting very carried away and enjoying myself as I had no idea how many hills were waiting down the course, I would pay for this recklessness in a big way further down the road.
I was also learning very quickly that on the flat and downhill having a TT bike is a massive advantage over a road bike but as soon as we hit the hills I was quickly out the back and worrying this could be a problem later on (first 60k was rolling hills, the second 60k was all climbing). Turns out there was a reason I only saw 2 other TT bikes out on the course, they are not good for a 122k of hills!
Before long we were down to a group of 5 with me and a nice geologist, who I spent most of the ride with, doing the majority of the work at the front. Suddenly the guy who was sat at the back pushed off the front and the guy who was 4th joined him and they accelerated away! The three of us were rather shocked by this poor etiquette but carried on working together. Then 2-3k down the road they were back in sight and I decided I wanted my tow that they owed us so pushed us on and caught them up! (Things like this were one of a number of childish mistakes that came to haunt me later!)
The race then continued along the rolling roads towards Squamish. Our group was flying and moving slowly through groups of pelotons. We were also moving through low cloud and heavy rain showers so there wasn’t much in the way of views but it was quite atmospheric with the low cloud over the mountains. I was also regretting not bringing my jacket!
Some of the views I would have seen had it not been pouring with rain! (taken on the return trip)

Climb to Whistler
Once we were through Squamish we were climbing pretty much the whole way to Whistler and I was feeling ok at this point in a group of about 10 although I was doing less time on the front. Our group was working well with everyone having a go on the front. Then on about the third sustained climb it all started to go wrong! I had finished my stint so was just starting at the back but as people rolled off they were unable to stay with the group and so by the top of the hill we were down to 3. This didn’t suit me at all as my legs were screaming. I was quite quickly dropped by the other two although as we hit flat and brief downhill sections I would come back to them but could never quite get back on their wheel. That would be my last peloton!!
So with about 45k to I was riding alone and beginning to really struggle. I also realised at this point I hadn’t been eating or drinking nearly enough due to the rain and not paying attention/having too much fun. (another major mistake)
I cracked on, grateful I’m used to riding alone, and was still making good time till about 90k, which is what I train for, at which point the legs really started to go and the climbs were becoming seriously slow/hard work. All the people I had dropped and all the pelotons that we had been overtaking were starting to come back at me. My new cycling jumper from South Africa was getting lots of compliments as they came past which was about the only positive!
At about the 100k mark I was really in trouble but luckily I came across supporters handing out cookies!! This gave me a massive boost along with the fact it was now a lot drier and got me through to the last aid station at 107k. Here I stopped for a break and had a nice chat with the three ladies at the nutrition stand, all super friendly and agreed what a silly idea it was, while eating my way through a large number of snacks. As I left they pointed out that there was ONLY 15k left to which I pointed out there was STILL 15k left at which point we all had a chuckle.
All this food combined with the easing gradient meant that the final 15k whilst hard work was a lot easier and my legs slowly started to come back to me for a fast finish.
For the finish you cycle in to Whistler, which goes on for a while, then a couple of sharp corners and under a logoed walkway. Coming up to the finish I had to avoid a cyclist who was swerving all over the place, as I passed I realised he had a flat tyre and clearly had decided it was easier to cycle to the end on it than change it, cant have been good for the wheel! Once you turned the last corner it wasn’t obvious the finish line was in front of you but riders stopping a the next corner was the give away.

So I had made it, but I had learned a valuable lesson of exactly how not to do a bike race. Do not go off really fast! Do keep drinking and eating! Do not spend all your time on the front of the peloton! Do take a rain jacket! Do not attack hills! Do it on a road bike! 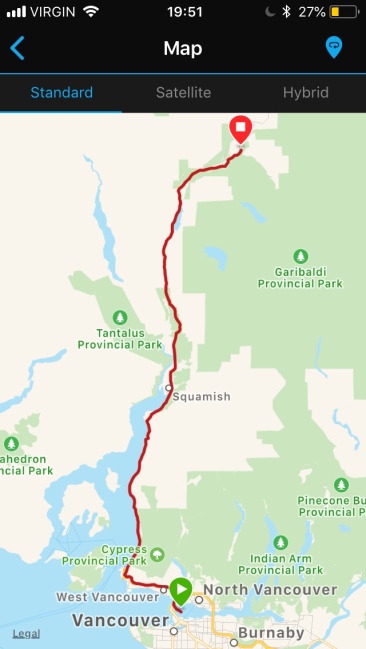 However with a time of 4 19 (467th) I was pretty happy and my estimation of time was right although more by fluke than anything (the first 70k was much quicker than anticipated due to the unforeseen drafting but the last 30 was much slower due to the lack of legs!). Keen to give it another crack though with more of a sensible race and see what happens. The winner did 3 15 which is insane! 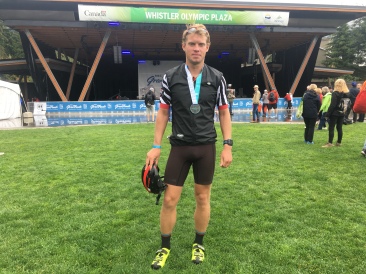 My bus didn’t leave till 4 so I had a few hours to kill pottering around Whistler, which is an awesome place and I cant wait to get up there for some skiing. There was an after party in the main square, which was good fun although with some very tired legs I was quite keen to get back. I found some interesting people to talk to and went to watch the finish where I was interviewed about how it went and where I was from. They were impressed I was from England and not surprised when I said it was tough!
The bus and bike transport put on by the event to get back to Vancouver was excellent and went very smoothly. The weather had cleared on the way back down so I finally got to enjoy the scenery, although by the time we got back to Vancouver it was absolutely pissing it down which made my short cycle home pretty miserable!!
A long but awesome day and now my legs are very tired, so now time to enjoy the off season with some skiing and hiking and I will be driving up to Whistler next time!!
50.116320 -122.957356
Whistler, BC V0N, Canada