Skip to content
I was very kindly invited to spend the weekend on Pasely Island (Sunshine Coast) with Nicky, a family friend, for her birthday weekend.
On Thursday afternoon we set off from Vancouver to Horsehoe Bay and got the ferry to Bowen Island before driving across the island to the West Coast. Here we unloaded the provisions for the weekend as the island has no shops. We were very kindly picked up by Nicky’s friends form Pasley, Tom and Jenny, for the short boat tip over to the island. It was a beautiful afternoon for the crossing and the fist thing I encountered on the island was an orchard full of deer which set the scene for what as was going to be an awesome weekend.

One of the full time residents 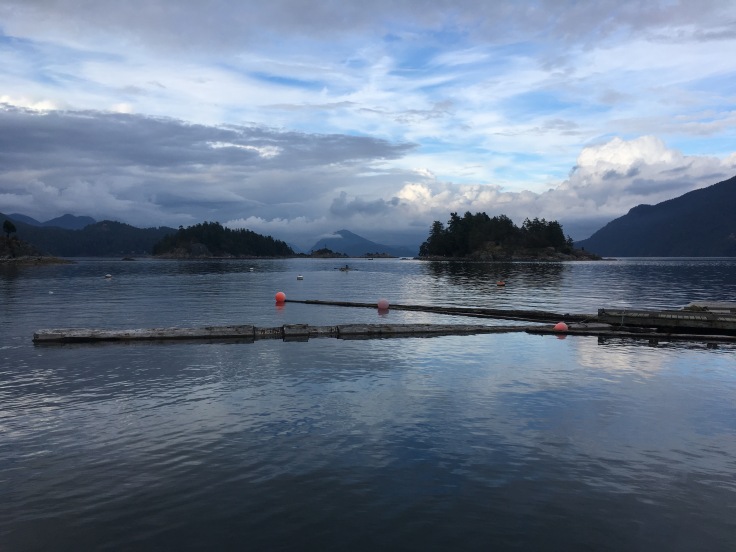 We had a drink on the dock before dinner, ‘dock time’, Nicky and I went for a quick swim as it was what I would describe as very fresh! We had a quiet dinner with the neighbours and cousins. Its a very small nit community where everyone knows everyone which makes for a very friendly environment. Dinner was bbq beer can chicken, a new idea to me but was delicious. Jenny also brought round an upside down plum cake which I could have eaten all evening.
Friday morning was super chilled celebrating Nicky’s birthday. I got the walked guided tour of the island looking at all the different houses and views before going for a swim out to Micky Island. Having tested the water the day before I wore my wetsuit this time. The plan had been to swim around Mickey Island but when I got there there were some mean looking seals on the rocks watching me. I decided instead to head out in to the waves for some practise following my issues in South Africa. After a short distance I noticed a boat heading my way (good spotting practise) . I swam on a bit and the boat was still heading for me. I stopped as there wasn’t much else I could do and waved at them. Luckily they had seen me and as they went past shouted they thought I was a crab pot as I was wearing a white swim hat. After this close call I decided to head back before any more drama. After lunch we relaxed and prepared for the rest of Nicky’s friends and family to arrive. I went for a quick fish and managed to catch a little cod but he was too small so was happily returned.

Just after 6 the rest of Nicky’s friends arrived, Jamie and Raquel who we would spend the rest of the weekend with, along with her cousins and sister in law. We were straight in to the birthday celebrations before moving on to dinner. Margo, Nicky’s sister had been making beef bourguignon all afternoon which is Nicky’s favourite (and I got to take the leftovers home with me) before an awesome cake for desert.
After dinner the party moved in to the living room with some more drinks and music. Slowly all the cousins and friends started to arrive and the party really began to kick off! Weirdly one of the friends on the island is best mates with my new boss so we sent him a selfie, very small world!
As the night went on the dancing and drinking both increased significantly, There were some concerns that the house was wobbling and I could definitely feel the floorboards flexing under the ‘dance floor’. Raquel, Jamie and I were the last ones standing dancing in to the early hours. I put the late finish down to a weird speaker that every time we tried to stop turned itself up and when we wanted it louder it wouldn’t! Not entirely sure what time we made it to bed but an excellent time was had by all and a brilliant party.
Saturday was very much a hangover day! I spent the morning finding out what happens at a girls slumber parties! As the only boy in the house I was made an honorary girl for the weekend! Slumber parties involve discussing a full range of interesting and some eye opening topics from mascara to dating, although there was a lot of focus on boys, occasionally there was a brief break to get my view on things!!
Having not ventured outside all day we deiced to head over to Gibsons for a late lunch, Tom and Jenny’s very kindly lent us their small boat for the 15 minute trip. We went to Smitty’s Oyster Bar which is right on the dock. The food was excellent and we shared a platter of: garlic prawns, halibut fritters, chicken wings and salmon fishcakes, washed down with some beer. We then grabbed a cocktail at a new Italian place down the road (Buono Osteria). As always my cocktail came in a girly glass despite being a whiskey cocktail. The food looked really good as well. 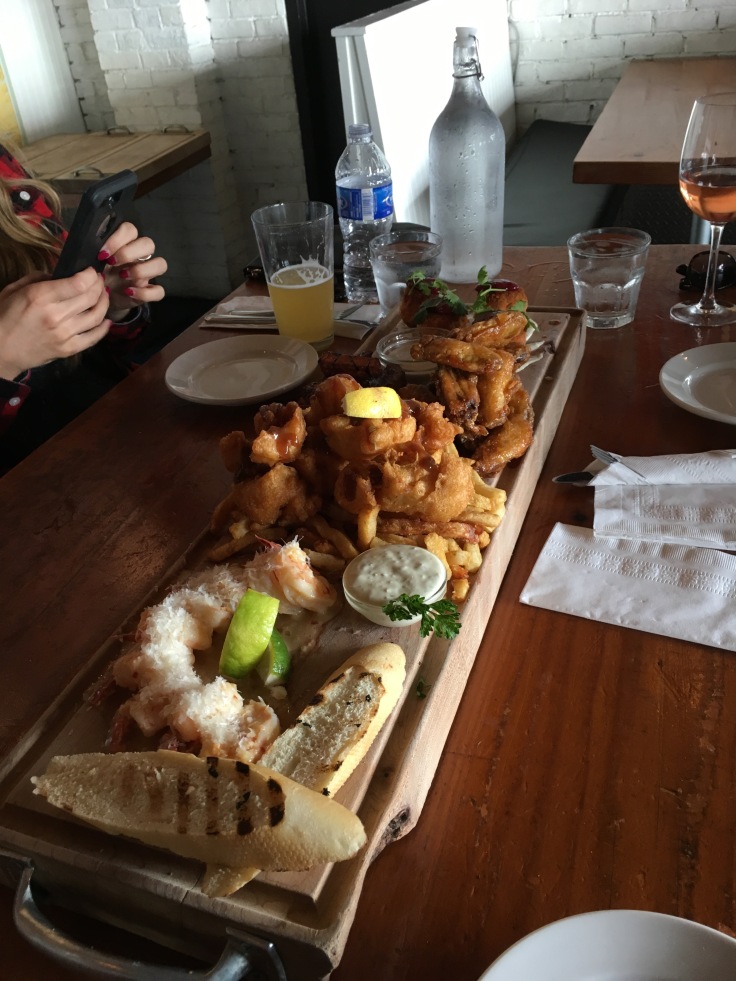 Smitty’s Sharing Platter
Having missed the showers we then headed back in the beautiful sunshine, picking up the crab pot on the way but there was only a small rock crab who was returned. 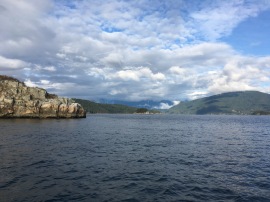 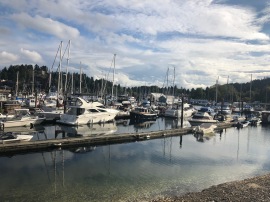 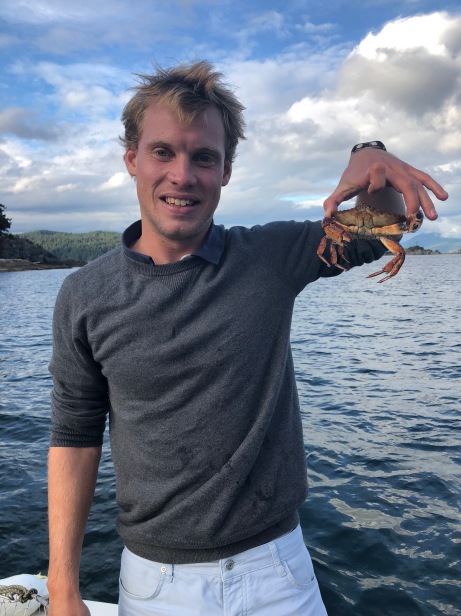 A little rock crab
I went for a quick dip to freshen up before dinner. We had people around again but as everyone was so tired from the night before it was a much more sedate affair. We had run the batteries a bit low so had no lighting which meant that dinner was done by candle light. There was a very brief attempt for some drinks after dinner but no one had the energy so we collapsed very early! 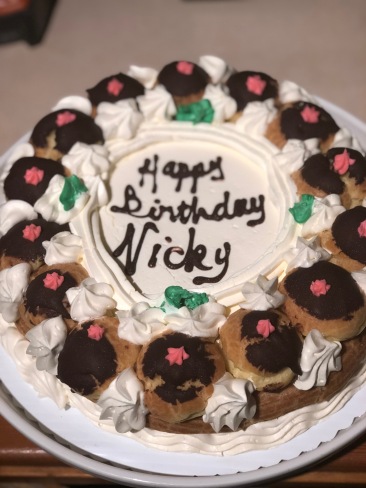 Sunday morning was again very laid back and the girls slumber party continued, I was allowed to join the lie in! The weather was awful so people were a bit stressed about leaving the island but most people headed off safely around midday. Nicky and I stayed and as we had nothing to do on Monday decided to stay for another night. We had to get the generator going to recharge the house batteries and then spent the afternoon with Stuart, Chantelle and their kids before Stuart and I fixed the logs back to the dock shelter, I did my best lumberjack impression. The others went to check the pot and this time there were a couple of crabs so Stuart and I would be able to try Pasley Island crab. It was also interesting learning how they are killed which was completely new to me.
The crab was our starter at dinner and delicious, I will definitely be on the look out for more, before some chicken, vegetables and salad and a nice quiet evening with some music. Stuart and Chantelle are very interesting so there was a lot to discuss. 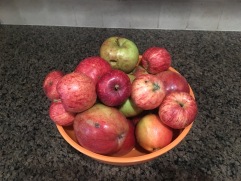 On Monday Nicky and tidied up the house, packed up and set off home. On the way back I picked some apples from the orchard which was a little tricky as all the low ones had gone. On the way back across to Bowen Island we saw a small group of porpoises/dolphins (3-4) which apparently is quite rare. We tried to stay and watch them but they seemed quite keen to move on unfortunately. It was a great end to a brilliant weekend that reminded me of our holidays in Devon and summers on the Isle of Wight.
A big thanks to Nicky for inviting me, and to all her friends and family for making me so welcome.
49.366334 -123.461332
Pasley Island, BC V0N 1V0, Canada