Skip to content
With the forecast predicted to be nice and the fishing conditions on the up, after the rain at the weekend had caused the Capilano river dam to be opened,  I set off to explore the the Upper Capilano in search of the Coho (Silver) Salmon. Without a car I was cycling on my new commuter bike. This was a big change from my road bike and TT bike and made me miss them straight away, however it is hardy and perfect for little trips like this.
I set off in very high hopes with multiple plastic bags to bring my fish back as in theory the conditions were perfect and I was taking both my spinning and fly rod. It was the most beautiful morning so I had to stop on the Lions Gate bridge for some photos. It would turn in to once of the nicest days since I arrived which made for the most glorious day on the river. 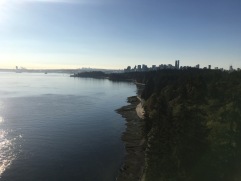 Getting to the Upper Capilano is a bit of an uphill slog but very manageable and my total riding time was 45 mins with a couple of stops, so very doable.

Having locked the bike up I set off down the trails towards Three Rocks pool which I had been told was a good hike. Its not very far (10-15 mins) but getting down to the river is quite hard, its a proper climb down. My helmet escaped at one point and rolled off down the cliff, it took me quite a while to find it at the bottom but I eventually made it down to the river. 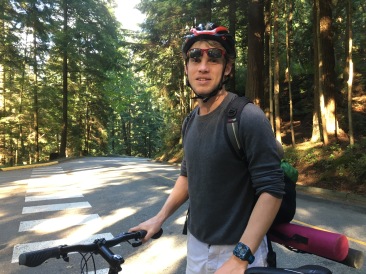 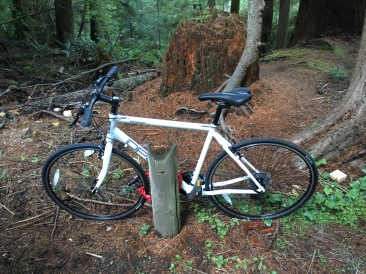 There were a few people fishing on the river but only one guy on the Three Rocks pool. I went to speak to him as didn’t want to break any river etiquette!! He was a lovely Italian man who was very helpful. He told me that there should be a lot more fish in the river than he could see and so was probably going to head further down the river as they must be stuck somewhere. He also recommended moving up to the top pool (cable pool) as there would be more fish, but at both places there would also be more people. He also pointed out the visibility wasn’t great which was also confirmed by pretty much everyone I met.

I started with the spinner and quickly lost a lure so moved to fly with out much success. I eventually timed a cast perfectly to draw my fly back through a shoal of fish as they cruised past and had a good follow from an absolute monster but he came up just short. I didn’t get much more action but was slowly moving through my kit due to some bad luck and poor fishing, although spinners in rocky pools do seem to get caught a lot!! Just before lunch I had another good follow with 3-4 smaller fish following my fly and one got so close he even opened his mouth before pulling away! Gutted!
It reminded me a lot of bone fishing in Belize where you have to cast in front of where the fish are swimming and time it perfectly. Although there the fish are feeding which makes it a lot easier!
After lunch I moved down to the next pool (Granny’s Cove) to chat to the two people there and see if they had any luck, they hadn’t but a third guy had on the fly although he didn’t seem very interested in helping me so I went back to the other two. I joined them for a bit as there were quite a few fish moving around but they showed no interest in anything we offered them. Not long after I joined them they were heading off and one gave me a fly which was very kind and I carried on. Once I had tried everything in my locker and not had the slightest bit of interest I moved back up to the top pool for the rest of the afternoon.

The sun was now shining on the pool which meant I could see there were so many fish cruising around. I got back to it with the fly as I had run out of small spinners. I fished for a couple of hours with a few follows but nothing very close. The most interesting moment came when a man came snorkelling down the river. Firstly this moved all the fish towards me which was great! However, after walking round me he got back in the pool and pushed them all away again which was rather annoying. We had a chat after though and he was very nice but maybe a lesson needed in not scaring fish!
Having decided to stay put rather than move to the busier parts of the river meant I had the whole section to myself for the majority of the day which was great as its a beautiful secluded section of the river.
I was beginning to tire so I moved back down to the bottom pool but with no sign of activity I decided to call it a day having spent 7 hours on the river. It was a tough day and I have a lot to learn but that will come and was a great first recce. I will definitely be going back as I refuse to be outwitted by so many fish!

I took a different route back and it was even harder, I was very glad I was in my hiking boots. In the car park I met a couple of people who had been fishing cable pool. They reported a similar day, not many fish in the water and poor visibility. Plus those that had caught had caught early in the morning so that will probably be worth exploring. The river was also falling very fast so it may be that I missed the best days or the fish are stuck further down the river, next time the dam opens I will make sure I’m ready.
Despite no dinner it was a gorgeous day to be fishing on a beautiful river which is what its really about. Will be back in a few days to try the same area and do some more exploring!
49.337302 -123.126088
Capilano River, British Columbia, Canada