I spent Saturday morning exploring one of North Vancouver’s trails. Liam and I had initially planned to go up Seymour however after a slight routing error we ended up at the Lynn Valley and decided to roll with it.

We started at the car park by the suspension bridge and took the trail along the Lynn River up the valley. It is a very straightforward trail as you run straight up the east side of there river. There is one point where you head inland at the top of the Lynn Loop trail but it is very well signed.

The first few km’s is gently rolling ground and a very good trail for running and some some good views of the river. The path then narrows for about 1.5-2km but it is still fairly flat but slightly harder going with rocks and some roots.

Next you head up in to the forest and this is where it starts to get interesting. You start to climb for the 2-3 kms up to the falls. Today it was raining lightly but there was a lot of rain in the last 24 hours and so it was seriously wet. The path in places had turned in to a stream and there were a number of rocks which along with the tough gradient made this a challenging period of the run. There were also a number of larger streams across the pass that had to be navigated. I was beginning to struggle so was very grateful for the energy bar Liam had given me at the beginning!

The last part of the climb levels off again but wasn’t any drier or easier to navigate which takes you to the final river. Here there is a sharp climb up to the falls or a bridge across the river where the hike continues into the mountains. I crossed the bridge to have a look and it is one of the most wobbly/swaying bridges I’ve been on, despite it looking super secure. 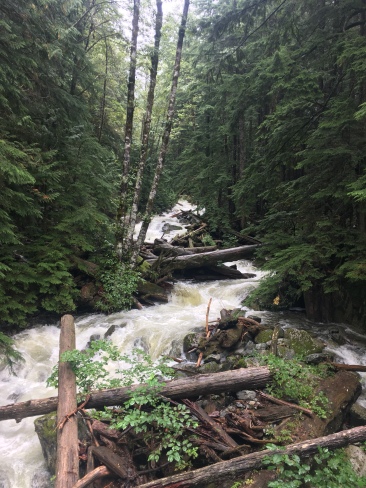 I briefly popped up to the falls to have a look around before setting back off as it was pretty wet.

I started back down knowing what to expect and knew that while running up was harder physically down was going to be more challenging. The flat was easy but on the downhills you have to keep one eye where you are treading and one 15m ahead to plan your route through the rocks and tree routes. On the way back down the cloud had also come in and created a made the whole scene very eerie scene.

Once back on the flat it is a straight forward route back to the car park as it was just an out and back route although there are so many more routes you could mix it up each time. A lot more exploring to be done if I make it back but there are so many places to explore near Vancouver that I probably wont be back for a while. 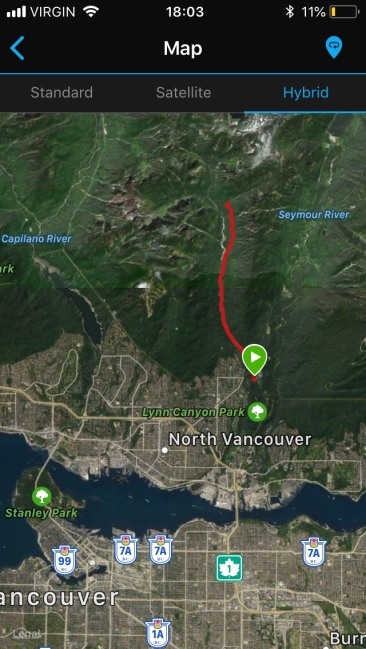 A great run for a Saturday morning, 17.36km and 350m of climbing, although was glad it was raining as kept me nice and cool. Looking forward to doing some more trail running over the winter but a good start.