Sophie and Will were the first family members to make the trip out from the UK. I met them at the airport as they had very kindly carried my (third) bike all around the UK and then transported it to Canada for me.

It was so nice to see them. We grabbed a taxied to their AirBnB and quickly popped to the shops so they could get some dinner and snacks. They were knackered and I had to go and dog sit for the evening so I left them to it and agreed to meet at mine in the morning.

They successfully managed to work the bus system in Vancouver (which is awesome and so easy to use) and I showed them my apartment. They were very impressed but unfortunately its only a sublet and I will have to downgrade when I move out  – but for now its awesome and making the most of it.

After a brief delay (I was watching the ironman world champs) we walked to and around Granville Island market. It was lovely weather and the market is a great place to go when its nice  and walk around to get a feel for Vancouver as it sits on the harbour under the bridge. Sophie very nearly bought a very expensive, but very nice hat much to Will’s disapproval. The lesson she learnt is look at the price before falling in love with a hat!! 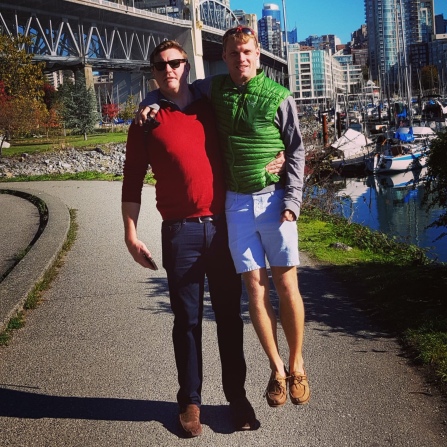 Next we walked along the waterfront towards Kitsilano enjoying the sun and warm weather before going to Local for lunch. This has become one of my favourite spots and on a nice day its great to sit outside, even thought there was a bit of a chill in the air. Good selection of drinks and the food is excellent – my favourite is the fish tacos.

Next on the list was MEC (Mountain Equipment Co-op) as it was in their book and its my favourite shop. Not the typical tourist expedition but it has everything you could possibly need for any outdoors activity, apart from fishing but Pacific Angler is basically next door :)!

They were quite tired again so we went back to mine to chill for a couple of hours. I got to watch the end of the Ironman world champs as it was still going, which does drive home what a challenge its going to be when I get to the start line.

For dinner we walked into Yaletown as they very kindly took me to Minamo, one of the best sushi restaurant in Vancouver, for dinner. The sushi was amazing although we were all rather confused by the last one we received. It tasted and had the texture of lemon drizzle cake but was rice and prawn. It was very confusing but absolutely delicious.

Very tired we then retreated home ahead of our Sunday hike.

Liam (aka the Crazy Raven) picked us up nice and early to go and hike St Marks summit from the top of Cypress Mountain. On the drive up Cypress we stopped off at the view point as iI think it was the clearest day since I have arrived. We could easily see Mt Baker, Vancouver Island and various other islands/mountains I haven’t seen before. It was pretty special but living here I do think you get slightly accustomed to ridiculous scenery.

We parked at the top and then started the hike past the ski runs. First we hiked to the Bowen Island lookout which has an amazing view out over the islands towards Gibsons. The hike to this point was fairly straight forward but due to the weather being so cold there were lots of scenic points with ice on the ponds and the path.

From the Bowen Look Out up to the St Marks Summit the hike gets a bit harder. The trail is clear but there are a number of up and downs and the path isn’t straight forward with roots and rocks that have be be avoided. We stopped for a few breaks (the Londoners struggling to adapt to the outdoors, or jet lag!).

We eventually made it to the top, had a nice long break, some snacks and made the most of the opportunity to take some photos as it was so clear. We had a slight issue with a guy photobombing our photos but we eventually managed to get a good one before heading back down. Unfortunately we didn’t see a bear but did end up walking down one of the ski runs and cant wait for the snow to arrive now.

Our total trip was 11.8k with 612m of elevation and took us 3:46. A very nice intermediate level hike right on the doorstep.

On the way back The Crazy Raven dropped us off in downtown so I could show Sophie and Will around and we grabbed some lunch. I also showed them where their Monday flight was going from as the lucky devils were flying to Tofino on Harbour Air in the most amazing weather.

We encountered one of the most annoying things I have come across in Vancouver while trying to have lunch. The first place we went to did the annoying thing of having empty tables but saying there was a 20 min wait as they didn’t have enough servers. It really annoys me seeing empty tables and being told to wait, I would rather have a table and slower service but guess they don’t so we ended up going to another restaurant.

They were a bit tired so I let them go home and I popped out for a quick hard 6k along the Seawall. On my return I was getting no response and was a bit worried they were going to miss dinner but it turns out they were just having a nap as still slightly struggling with jet lag. Plus they were on holiday so could do what they want!

We went for poke, which was a first for me, at Pacific Spirit on W 4th. I am now a big fan it and will definitely be going back. Before calling it a night we then went for a quick drink at Browns across the road with Liam and Laura. Sophie had a slight misunderstanding on ordering a Martini, but this made her extra careful for the rest of her trip.

Monday morning I had to start my new job which while exciting was rather sad as it marks the end of my retirement and easy adventuring. That being said the view from my  desk looks out over Vancouver towards Mt Baker so I cant really complain!!

On the Wednesday I went to a Whitecaps (soccer) game. I am going to call it soccer rather than football as the standard was really bad. You can see why ex premiership players can come over here and make a big impact! However I had a fun evening and they have a marching band which I think is something all teams should have.

Sophie and Will flew to Tofino on Vancouver Island and for the first time in months I was jealous of people travelling while I was stuck in the office!! What made it even worse was they were on my doorstep!!

They had the most amazing week and below are a selection of their photos. I will definitely be visiting Tofino soon!! 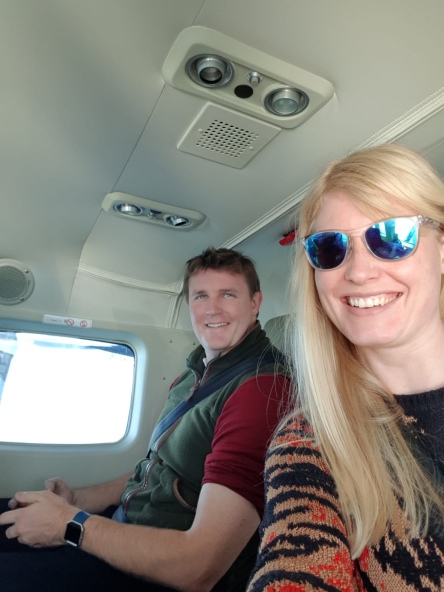 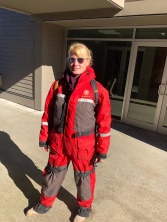 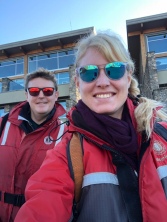 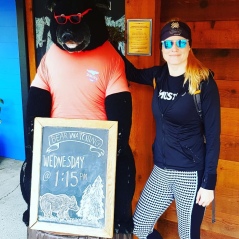 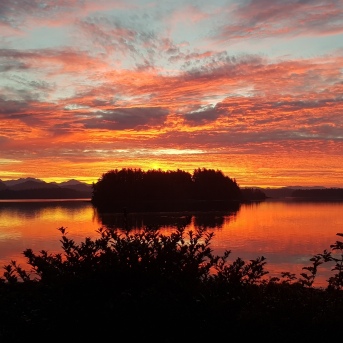 Will was meant to head home and Sophie was going to come and stay for an extra 24 hours. However their flights back from Victoria (Vancouver Island) were delayed by fog and so Will ended up staying an extra day as well. Luckily for him he hadn’t cancelled his flight for Saturday so wasn’t the end of the world and a bonus for Sophie and I.

We went for a drink in Gastown at The Portside Pub, which is a pub based in the bottom of a boat. We then walked through W Hastings and both Sophie and Will were quite shocked by what they saw but unfortunately that is just the way it is in Vancouver.

We went back to Granville Island for dinner. First we tried The Sandbar but they didn’t have any room so went to Bridges. However the food didn’t look great so we just had a drink and some poutine (as will and sophie hadn’t had any yet) and then returned to The Sandbar a bit later and had no problem getting a table. People seem to eat quite early here. The Sandbar was quite expensive but was very good and a really nice final dinner before they headed back across the pond. It also has a really fun guy playing the piano.

As it was late we just went home and collapsed.

We had a super chilled morning at home and then went for brunch at Edible on Granville Island. It was a recommendation from my flat mate and it was a very good call. Both the food and drinks were awesome, I had a delicious maple hot toddy and Will finally tried a Caesar (bloody mary with clam juice). We had the eggs benedict (bacon or salmon) and the breakfast sandwich which were all excellent.

For our final activity we hired bikes to cycle around Stanley Park. Will and Sophie hired a tandem which they picked up annoyingly quickly. They had the occasional disagreement as to who was to blame for their wobbles but for the most part they made a good team! I’m not sure how good they are at sightseeing though as they set a pretty quick pace round the park with Will making excellent use of his bell! It was another lovely day although the haze had started to come in over the last few days so wasn’t quite as clear. In the sun it was really warm but round the back of Stanley Park in the shade it was really cold as the air definitely has a chill to it now. 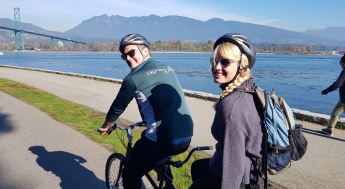 We travelled a fair distance, going the whole way round the park, False Creek and back over Burrard Bridge before dropping the bikes off.

For our final meal we went to tacofino which was delicious – I enjoyed all three tacos although I did struggle to identify which was which!!

We walked home enjoying the last of the fresh air before putting them on a long flight back to the big smoke! They packed and we had a nice final chill before walking them to the bus stop for the airport! 😦

I think I was a good tour guide and they got a good feel of Vancouver and why I am so happy here. I also think they have fallen in love with the place and want to move here although they are rather set in London. They definitely didn’t want to leave (and I didn’t want them to).

It’s been so nice having them visit as I haven’t seen any family since South Africa in August and not going back to the UK till next summer. I also don’t know when my next visit is so was very sad to see them go.

I hope they had the most awesome time and loved BC (mentioned best holiday ever) so fingers crossed I might see them again soon as its so much better than london!! 🙂