So I thought starting work would make my travels and adventures more difficult. However, first thing my new company did was send me to Toronto for two weeks training which was great.

I set off thinking two weeks was quite a long time and I would miss Vancouver as after 3 months I’m really finding my feet and looking forward to getting settled back in to a work routine. The first week in the office was a bit tricky after 3.5 months off.

As it turned out I was right and I did miss Vancouver. The whole reason for leaving London was that I don’t like big cities and the environment. The first thing I noticed in Toronto was how similar it was to London. Very corporate, lots of banks, all the accountancy firms and no mountains.  I wanted to go straight back to Vancouver.

The first week I was just moving between the hotel and the office in the financial district. The only thing of note was that as on a work trip we could eat out (to a budget) which was fun so tried quite a few restaurants. By the end of the two weeks the novelty had worn off and I was just looking forward to some home cooked food and not being waitered on! The highlight was Miku, a Vancouvan sushi restaurant (sister restaurant of Minami that Sophie took me to), where they had a couple of items that came within our lunch budget.  We also treated ourselves to a night at The Keg, a steak restaurant but the highlight for me was definitely the baked brie starter!

This week also marked the start of training for the 2019 season after a very fun off season. This means back to 7-9 sessions a week. It has been hard as I only have access to a small pool and gym in the hotel but doing my best. For this week the priority is getting used to training that often again even if the sessions aren’t quite what they should be. I am also adding gym/strength work for this winter as hoping it will take me to the next level as I prepare for the Europeans next year and Whistler 70.3 (Lake Placid 70.3 if I can find the time and the money).

On Friday evening I headed out for dinner with a colleague at a place called Don Don Izakaya which is sort of Japanese tapas. It was absolutely delicious and while I am not a massive fan of Toronto I have to say the food is of a much higher standard than Vancouver. We also had half a cheesecake each on the way home as why not!

Saturday morning was nice and relaxed. The curtains in the Fairmont Royal York were so effective that I actually managed to sleep in which is very rare.I did some studying while watching some of the premiership games before setting off on a run.

A nearby nature reserve had been recommended to me as a nice place to go although they said they cycled there. It was very cold so I had to wear my silly hat and I really need to get some gloves!! Soon I am either going to have to start layering up or move indoors for training.

I set off looking to do about 12-14k. I realised pretty quickly that this was not going to be 12-14k run. It was a very nice route running along the water front and then in to the nature reserve, although I did have to go through the docks to get there which was less scenic. It was nice to get out of the city and a nice area to explore as there are no dogs or cars. There were loads of ducks and a great view of the Toronto skyline. I was also amazed by how big the waves were on the lake but given the size of the lake I guess it probably isn’t that surprising. It was really tough heading back in to the wind and light rain/snow. I did survive better than my iPhone though which shut down because it got too cold! 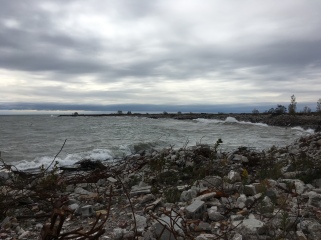 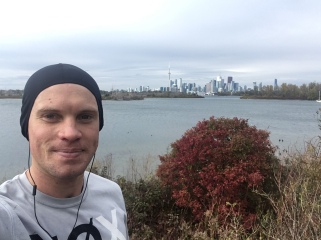 I spent the rest of the day chilling at the hotel as was rather tired given the fact my 12k run had turned into a half marathon in the freezing cold. In the evening I went out to explore and had a few drinks, definitely encountered some snow, before returning for a good nights sleep.

Sunday morning was again nice and relaxed but the weather was pretty rubbish so I didn’t really feel like going outdoors. I had planned to go to Niagara falls however due to a lack of actually planning and not wanting to spend 2 hrs each way on a bus I decided that was something to do another time with someone. Instead I did a technique session in the pool before heading to the Hockey Hall of Fame as my tourist activity.

The Hall of Fame is a great thing to do if here, and would have been even better if I knew anything about hockey. I had to ask some rather straight forward questions that amused other people. I learnt how Wayne Gretzky is in a world of his own; found an Isle of Wight Raiders Jersey in the International section (one of the only club jerseys); had a look round the trophy room (hockey does pretty serious trophies) and had a go in goal! I saved 5/8 which was pretty awesome although not going to lie most of them just hit me. 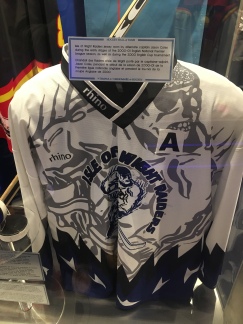 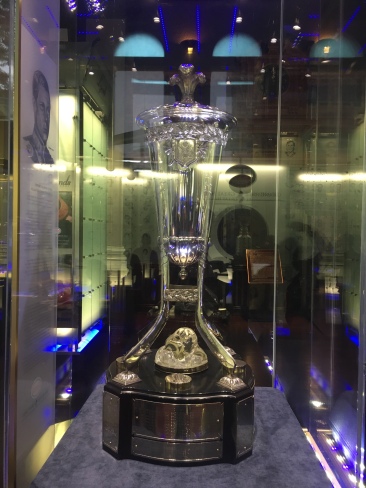 After looking round I thought I should get a Canucks jersey but turns out they make football shirts look cheap so may have to wait on that one for a bit!!

The second week was more of the same, lots of work and not much exploring. The training sessions increased in intensity which is good so am getting back in to the swing of things. A couple of us went to Pai, thai restaurant, on Tuesday evening as we had tried in the first week but Tuesday at 9 was the earliest we could book. It was absolutely delicious and by far the best value meal I had in Toronto so would definitely recommend there of Don Don Ikazaya if you are looking for somewhere. Thursday evening we went out as a team to Gusto 101 which is a lovely Italian place and again the food was delicious, a full range of sharing entrees and mains.

By the time training had finished on Friday afternoon I was exhausted and desperate to get back to Vancouver. I don’t know how people spend weeks at a time living in hotels it really isn’t that fun. Unfortunately I couldn’t change my flight without a fee so had to go on the 8pm (which goes on to Sydney). Still cant really get my head round how big Canada is, it took 5 hours to fly back, I can go anywhere in Europe from the UK in less than that!

Now happily back in Vancouver and looking to stay here for a while, apart from the occasional trip to the states I’m not planning on anything big till next summer. Too much to do here and I now know I was right to choose to move to Vancouver despite the limited job market and high cost of living.